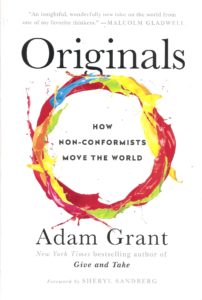 Have you ever heard of a vuja-de? It is the opposite of a déjà vu! We face something familiar, but we see it in a fresh way that enables us to gain new insights into old problems. This is one way how an original works.

In his new book ‘Originals’, Adam Grant, professor Management and Psychology at Wharton School, presents his findings on a research on what originals do differently.

The former magician explains that originals are actually more ordinary than we realize. On the surface they appear bold but underneath they’re as uncertain and prefer to avoid risk like most of us.

So what are things originals do? Here are 3 habits that touched me most:

– They take action! They speak up since they don’t want to accept the default and they know in their hearts that failing would yield less regret than failing to try

– They always ask for feedback, especially from their peers and the most severe critics

– Besides being new & practical idea generators, they also focus on the execution of an idea and they repeat their ideas between 10 and 20 times

This article is way too short to include everything what I’ve learned from studying “Originals”. Click here to receive a FREE copy of my favorite parts of the book!

What I didn’t like about it and why you should not read it:

A lot of scientific (psychological and social) studies are presented and arguments are backed by data and facts. This makes it not easy to read but it makes the book very credible.

You should not read this book if you would like a quick read on how to become an original.

Also, you should not read this book if you are comfortable where you are now, you don’t want to stand up for an idea or opinion and want to stay unnoticed.

What I liked about it and why you should read it:

I did enjoy the story of why the Segway failed and the one of why Martin Luther King Jr.s’ speech in Washington D.C. was such a success even though he wrote it the night before and actually had 2 months to write it!

You’ll learn about how to adopt a form powerless communication by accentuating the flaws in your idea. This actually helps you to get people on board!

It gives you benefits of procrastination and a boost (courage) not to give up when there are bumps in the road towards realizing your ideas.

It gives insight in the difference between surface acting and deep acting and how the latter can help you in managing your emotions (and to get your original idea across better).

The last part of the book gives you actions for impact and to be more original. This was more than a summary!

Who should read this book:

– Individuals who would like to sell or pitch an idea better. For women and minorities on how to get an idea across in a hostile organization

– Parents who want to raise their children to be more original

– Organizations who want more originals and a strong culture

– And rebels who want to be more effective….

So, what do you think is an original? Do you know one? What have they done differently to stand out? Let me know in the comment box below!

And….what did you do when you had an original idea?

Great review and a good recommendation. I’ll put it on my list. Currently reading “The power of habit” by Charles Duhigg. Also very good.

Thanks for your comment Walter! I switched over to fiction (A wrinkle in time by Madeleine l’Engle) as recommended by Adam Grant. Let me know what you liked about ‘Originals’ when you get to read it.