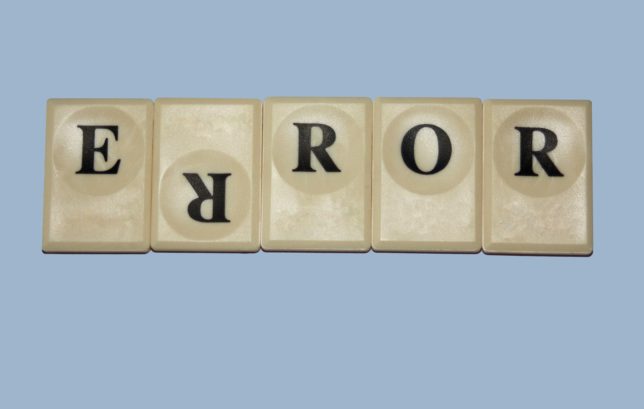 It was a Friday afternoon. I was sitting with my manager, another colleague and a client in the small meeting room of the office. We had been working hard to meet a deadline and one hour before the meeting, we realized that a terrible mistake had been made….

The project was part of a real estate development plan. We had been commissioned to execute preliminary field investigations consisting of taking  soil samples from borings, to analyze them for different parameters and to do a desk study.

It turned out that the borings where executed at the wrong locations. Even outside of the project area!

The client went berserk. He also had his deadlines and had to report to his investors. He was yelling and was clearly in panic (as well).

I felt really bad since I was the one who was in the field to set the locations of the borings. Even writing about this, turns my stomach around again.

I am sure that you’ve made a similar painful mistake at work (or at home) which is still embarrassing today. This article gives you 4 tips on how to deal with mistakes.

First of all, admit it right away and apologize. There’s no point in giving excuses (or blaming others) other than explaining what had gone wrong. Take responsibility and ownership for your mistake. Excuses will only make things worse.

Second, look for ways to make the best out of it. Fix it! This means taking a step back (but don’t walk away!), take a deep breath and look at the situation again. In my case,  it turned out that with the available information we had enough data to make a preliminary report and the results of one boring even showed that we had to verify the findings by making another boring near the limits of the project area anyway.

Third, share your mistakes! Talking (or writing) about it, will help you to let go. I remember that within no time the whole office knew what had happened. There are companies who have special meetings where coworkers have to share their mistakes to their colleagues. The goal here is not to ridicule others, but to learn from other people’s mistakes in order to avoid similar mistakes in the future. Although, a good laugh at the end will help to release the tension and to see the situation from another perspective.

And, you’re not alone! Brilliant people such as Steve Jobs, Oprah Winfrey and Walt Disney got fired for their mistakes before they became successful.

Finally, reflect on the situation. Ask yourself how this could have happened. I remember standing in the field with my map and having a hard time finding the right locations. I was amazed that the site was so big! A couple of days later the fieldworkers called me to verify a specific location. This should have ringed an alarm bell and should have triggered me to check with the project manager. An important lesson for me was to communicate and to ask for help. Especially after I’ve made an error.

The next time you have made a mistake, admit it, take a deep breath, stay calm and see the situation as an opportunity to grow, act and learn. This way, you’ll be an example to others in how to deal with well…f#ckups.

I’ve been open and honest in sharing my painful mistake. Now, what
is yours? How did you handle it and what have you learned from it (or them…)? Let me know in the comment box below. I am looking forward reading from you!